TAM 022: T20 – How To Stop An ActiveCampaign Automation From Ending

Episode 22 is another “Tactical 20” show. A quick, easy implementable, tip or technique you can put to work in your business in under 20 minutes.

How to keep an ActiveCampaign automation from ending #podcast #marketingautomation

This week I share a tip from Darren Crawford, over at DarrenCrawford.com, on how to keep an ActiveCampaign automation from ending.

Sometimes you want to get an automation started and out there, get people going through it, but add to the end of it later. However, when ActiveCampaign sees a contact hit the last step in an automation (whether there is an official ‘end this automation' step or not) the system will consider the automation complete and end that automation for that contact.

This means that if you go back and add another email to the end of that automation those contacts that have already finished it, will not receive the new email. It will only go to new people entering the automation.

So how do you keep the automation alive and reserve the ability to add to it later? Listen in and find out and check out Darren's blog post here. 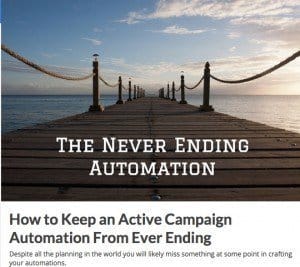 If you would like to have a chat about how you could be using marketing automation to grow your business join us in the Automation Nation private Facebook group.

Barry: Hi, it's Barry Moore back with another Tactical 20 Podcast.

Announcer: Welcome to The Active Marketer Podcast where we talk about how to design, automate and scale your business to the next level using sales and marketing automation. You can find out all the tips, tactics and techniques you need to get more customers and sell more stuff, over at theactivemarketer.com. Now here's your host Barry Moore.

Barry: Hi, I'm your host Barry and this is going to be another Tactical 20 Podcast. The Tactical 20 Podcasts are all about giving you an actionable tip, technique, or tactic that you can take away and implement in your business in less than 20 minutes.

Welcome back to episode 22, The Active Marketer Podcast. We're back with another Tactical 20 tip you can put into your business straight away. This tip comes from someone else this time, it's a really good tip, always believe in giving credit where credit is due and this is a really great tip, it comes from Darren Crawford over in darrencrawford.com. It involves how to keep an ActiveCampaign automation alive.

For example let's say you've got an automation, it's half-way built but you want to get it out there in the world, let's say there's four or five emails, not a responder sequence. You want to start getting people signed up so maybe one of those emails are going out once a week for the next five weeks. You know you're going to want to add more to it later on, but you just want to get it out there.

The tip that Darren gives us is, in your last step of the automation you can put what he calls a dam, or an automation dam. Basically just a break in the automation, where you put in a step that says, say, wait 1000 days. So you send out the first email, wait a week, send out the second one, wait a week, et cetera, et cetera. You get to number five in the sequence and that's the last one you've written now, but you know you want to come back and write another one later. What you can do is, you can put a step in there, wait 1000 days, or a year, or whatever you want it to be, but some long period of time.

Now, when you come back and you want to add the sixth email, or the sixth step in that automation, what you do is you go to the next step. You've got your wait 1000 day automation dam there holding everybody back, you go below that, you add a step below the dam, so you add email number six below the dam. Then you add another dam, a second dam after email six. So you've got wait 1000 days, send out email six, wait 1000 days again and then end automation.

Now everyone is backed up at that first dam, that first wait 1000 days step, all you need to do is change that to wait a day, or wait five minutes, or wait 10 minutes. As soon as you do that, as soon as you change it from 1000 days to one day, for example, people are going to proceed through the rest of the automation to the next step. Then they're immediately going get proceed on to email number six. They're going to get email number six and then they're going to back up again at that wait 1000 days step, that second automation dam that you put in there. Then you can go back and repeat the process as many times as you like.

It's a great way to keep an ActiveCampaign automation alive, keep it from ending, because even if you don't put a formal end step in there, when that customer, or when that contact gets to that last step in the sequence, ActiveCampaign is going to consider them finished. If you go back and add a sixth email later, all those 1000 people who have [inaudible 00:04:50] gone through the automation already won't get that sixth email, only new people through the automation will get it.

If you put in one of these automation dams and you make everybody wait, so they're in an active wait state, then you can go and put in as many steps as you like, after that automation dam. So a really great tip there from Darren Crawford, again, that's at darrencrawford.com. I'll link to it in the show notes. The show notes for this one won't be very much, it'll just have a link off to Darren's article because he explains how to do it. You can find those show notes at theactivemarketer.com/22. That is how you can keep an ActiveCampaign automation alive indefinitely using automation breaks or automation dam.

Thanks so much for tuning in and we will see you next week. We have a great interview with Dan Fagella. We're talking about marketing automation sequences that you can use in your business once again. So, see you next week everybody.

Get out there and design, automate and scale your business to the next level using sales and marketing automation. See you next week everybody.

Announcer: Thanks for listening to The Active Marketer Podcast. You can find the show notes and all the latest marketing automation news over at theactivemarketer.com.