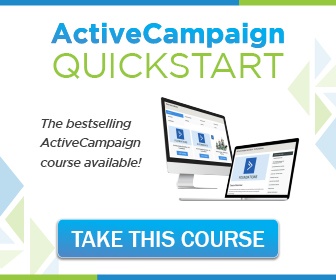 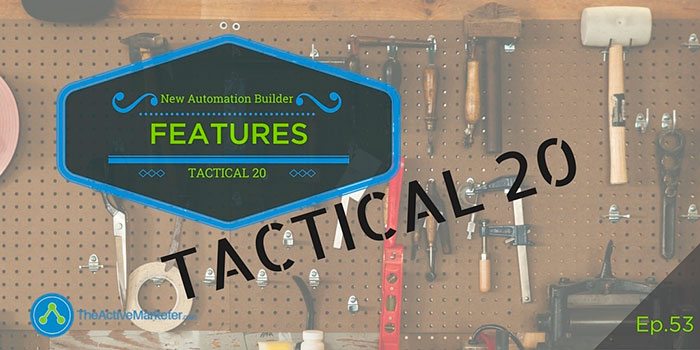 In this ‘Tactical 20' episode I talk new features in the ActiveCampaign automation builder.

If you want to give ActiveCampaign a try, you can set up a free trial account here.

If you want to take your sales funnel and marketing automation skills to the next level, join us at The Active Marketer Academy my private mastermind and coaching community where we share all the good stuff!

Inside you will find, courses, live training calls, quick wins, shared automations and a helpful community of smart business owners and service providers just like you. Check it out here.

If you have any questions or just need a tip from the ninjas, join us in the Automation Nation private Facebook group.

Barry: Hi, It's Barry Moore back with another Tactical 20 Podcast.

Announcer: Welcome to the Active Marketer Podcast. Where we talk about how to design, automate, and scale your business to the next level using sales and marketing automation. You could find out all the tips, tactics, and techniques you need to get more customers and sell more stuff over at TheActiveMarketer.com. Now here's your host, Barry.

Barry: Hi, I'm your host Barry Moore and this is going to be another Tactical 20 podcast. The Tactical 20 podcasts are all about giving you an actionable tip, technique, or tactic that you can take away and implement in your business in less than 20 minutes.

Welcome to episode 53 of the Active Marketer podcast. This will be another Tactical 20 format, some tips you can take with you and implement straight away. There has been some recent and very welcome changes to the ActiveCampaign automation builder of late, so we're going to talk about a few of those. With the automation builder, as you know, it is drag and drop and you could go ahead and build your automations. The problem has come in the past with editing those automations. If you wanted to change things around or move things around, you couldn't really do it. You had to delete the steps that were there and then basically rebuild the automation again from that point forward.

But the campaign has just released a new feature that will allow you to drag and drop, move existing steps in an automation. For example, if you have a Yes, No branch in your automation. If the person has this tag, Yes, we want to do this. No, we want to do this other thing, and you might build kind of two streams of an automation below that if then statement so you have a Yes branch and a No branch below that decision point.

Now, there is drag and drop movement of steps within an automation. So for example, if you got the logic wrong, for example, and you wanted all those steps that you built onto the Yes branch actually belonged over on the No branch or maybe half of those steps belonged over on the No branch, you can now grab the automation at any point during the flow and drag it to some other point in the automation. Which is really cool. So if there are a bunch of steps under the Yes branch, for example, you can just click on the top step that you want to move, move it all over, and when you let go of it over on the No branch, you'll get a little dialogue box pop up that will ask you, “Do you want to move this one step that you've grabbed? Do you want to move this step and all the following steps?” So basically pull across the whole branch of the automation or the whole sequence from that point forward, and move it across.

Also, “Do you want to copy that step?” So there might be an email on one branch, side of the branch, and you want that email on the other side of the branch as well, you can just drag that email across, drop it, and you can just choose to select Copy and that will make a copy of that automation on the other branch. Pretty useful stuff. Or you could copy an entire branch across. I don't know what you'd want to do that, but you can.

You can either move a single step, move a sequence of steps, you can copy a single step, or copy a sequence of steps and drag them all across all at once. Now when you do that, if there are currently any contacts in that automation, in that branch of steps that you've grabbed and moved or grabbed and copied, you'll also get a little dialogue that says, “Hey, what do you want me to do with the existing contacts here? Do you want me to basically just stop them from progressing any further through the automation or do you want us to grab them and move them all across to the new branch as well?” So not only will be you be asked if you want to move or copy, you'll also be asked what you want to do with any existing people who are in a wait step, for example, in that automation.

The other super cool, little thing that doesn't sound like a lot but if you've built any automations and gone back to them six months or nine months later, this is a killer feature. At each step in the automation now, in the lower right hand corner of that step, is a little yellow sticky note. You can actually click on that little yellow sticky note and you can leave a note in the automation at any juncture, any point, any node in that automation. You can leave a little note for yourself or for another team member so when you come back a few months time and you wonder what this step is doing here or what this email is supposed to accomplish or maybe what links are in this email or what this tag is for. You can leave little notes to yourself or little notes to someone else. That, you can figure out what that automation actually does, what it means, what it's supposed to be doing when you come back to it later. It's a fantastic feature. So now you can self-document the entire process in the automation.

Those are some really great upgrades to the Automation Builder. One, your ability to drag and drop entire steps of the automation and either move or copy them. You can now leave notes on any node in the automation for yourself or for other team members. And you can go to the Automation Marketplace and download or suck in, import straight into your account, a library of automation. A really fantastic set of features with ActiveCampaign Automations.

So we'll see you next time on episode 54. We will have another interview all about sending daily emails. Why you might want to do it and how you might want to go about getting started, and lessons learned from someone's journey along the paths of creating and launching a daily email.

So if you want any of the show notes, you want to see how this stuff works, head over to the ActiveMarketer.com/53 and you can see some of the automation features in action and we'll see you again next week.

So get out there and design, automate, and scale your business to the next level using sales and marketing automation. See you next week everybody.

Announcer: Thanks for listening to the Active Marketer Podcast. You can find the show notes and all the latest marketing animation news over at TheActiveMarketer.com.