Starting An ActiveCampaign Automation: Submits Form vs. Subscribes To List

ActiveCampaign automations are a very powerful vehicle for growing your business and are really only limited by your imagination.

The tricky part of course is knowing how to drive them.

You can start an automation any number of ways, but there needs to be at least one (can be more) ‘trigger’ that causes the automation to start in the first place.

Now if you are migrating across from one of the simpler, less capable systems like MailChimp or AWeber this can catch you out at first. You are probably just used to having one of your customers fill out a form and that is it.

If you have an autoresponder series set-up then it usually just starts when someone gets added to the list. Yeah?

Well the paradigm shift you need to get your head around when moving to a more advanced tool like ActiveCampaign or Infusionsoft is the ‘one list'. Your customers should not be and don’t need to be on more than one list.

With ActiveCampaign you can have one single master list of your subscribers or customers and segment them using ‘tags’. As the name implies, you can tag the subscribers to your list with a certain piece of information (or tag) to identify them.

There are heaps of ways you can use tags (more on this later) but to keep it simple you could do something like tag people who have bought something from you with the tag ‘Purchased’ to differentiate them from those people on your list that haven’t bought anything.

That way, at any point in the future you could filter your list (using the tag) to see just those people who have purchased from you in the past. Then you could send out an email just to those people (or that ‘segment’ of your list) offering your loyal customers a special offer.

As I said, there are a number of ways to use tags. One of the ways I like to use them is to track how I acquired a subscriber to my list. Did they join via the subscription box at the end of a blog post? Did they join via a free giveaway? Did they download a podcast transcription?

Tracking my lead source helps me understand which offers are working the best, and maybe even more importantly which ones aren’t working. That way I can cut the losers and come up with a new offer.

The most common way to get somebody on you list is to have them fill out a form. They put in their email address and they hit submit and they join your list. If you have been using something like AWeber of MailChimp you would be pretty familiar with this type of workflow.

However, as we said, in ActiveCampaign you have only one list. So if we are tracking people by which lead source (which form) they joined us with and they are all ending up on the same list, how do we tag them to keep track of where they came from.

In other autoresponder tools like AWeber, you create a form, then someone fills out a form, they hit ‘submit’, they join the list, and then your autoresponder fires. In ActiveCampaign that would look something like the picture below. They fill out a form, which joins them to a list, then we tag them with our tag to track where they came from 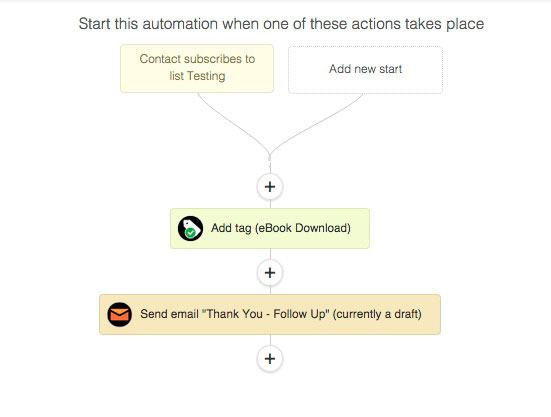 The problem with this workflow is that when anyone joins that list, regardless of which form they filled out, thay are going to get tagged with ‘eBook download’ regardless of whether they downloaded the ebook or not. So the old AWeber or MailChimp way won’t work.

Then we would fire and automation using ‘submits form’ as the trigger, rather than ‘joins list’. Submitting the form will join them to the list anyway so you done’t have to worry about that bit.
(See the picture below). 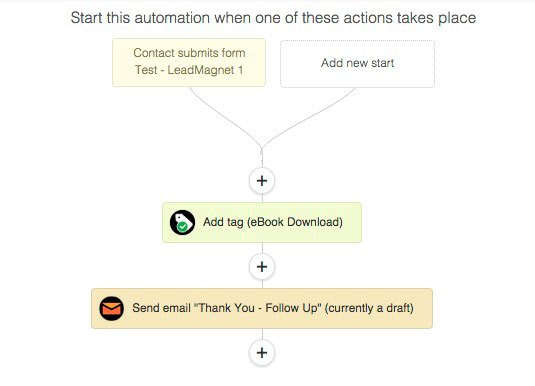 That way we can have an automation for each potential lead source form, that tags our lead with the appropriate lead source tag. Let that run for a few weeks or months and you will be able to see (by the number of people with the corresponding tag) which lead sources are working the best.

As you can see tags can be a powerful way to segment your list and follow segments of that lists that are relevant to them. However, you have to first get away from the many lists paradigm used by the less sophisticated email service providers.

Let me know in the comments below how you are using tags in ActiveCampaign.

Want To Know More About ActiveCampaign? Take Our Bestselling Course